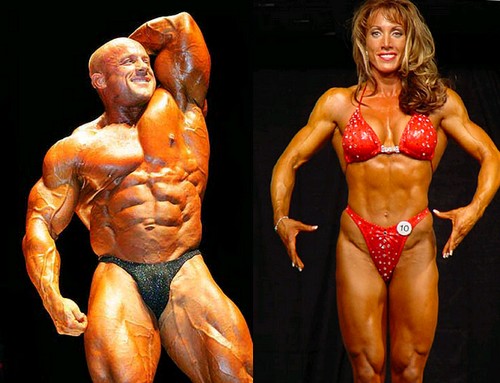 I will admit that I don’t really follow the world of body building. The three body builders I know most about are Arnold Schwarzenegger (obviously), Ronnie Coleman (my brother use to run around saying “Ain’t nothing but a peanut”), and Lou Ferrigno (who doesn’t love the Incredible Hulk?). But when I heard about Craig Titus and Kelly Ryan, I knew I had to dig deeper. I had to know more about the body building couple from hell….

Craig Michael Titus was born on January 14, 1967 In Wyandotte, Washington. I could not find much on his life but I got the basics. Titus grew up in Riverview, Michigan a small city near Detroit. He has one younger brother named Kevin and one younger sister named Nicole (how lovely). He played football in high school but quit because he felt he was too small. He later took up wrestling. By the time he graduated high school Craig Titus was 5’9” and 185 pounds. He took up weight training and because of his somewhat small stature saw quick results. The shorter you are the quicker you gain muscle definition, for example I would start seeing results from weight lifting in half the time of my husband who is 6’10” (mentioning his height is my biggest flex, just let me have this). He decided to become a bodybuilder. Titus’s first bodybuilding show was the 1988 Houston Bodybuilding Championships in which he won the Men’s Open middleweight class and the overall title. That is all I have on the background of Craig Titus.

I found I had the same issue with Kelly Ryan, I had a hard time collecting information about her background. Kelly Ann Ryan was born on July 10, 1972 in Minneapolis, Minnesota. Ryan got an early start on her fitness career after she took up gymnastics at the age of eight. By the time Ryan got to high school she had left gymnastics behind and took up cheerleading and basketball. After graduating high school Kelly Ryan went on to attend the University of South Carolina. While studying for her degree in journalism she also worked as a choreographer, which would prove very useful in her decision to become a top fitness athlete. Her first fitness competition was the NPC South Carolina State in 1995, where she took home first place. She would eventually end up winning eight fitness competitions. Her background and presence in fitness contests have made her a familiar face at fitness expositions as well as in fitness magazines. Well, that is all I have on Kelly Ryan. I guess that means we can get to the juicy stuff sooner rather than later. Yay!

Ryan and Titus married in 2000 after meeting at a competition a few years earlier. They soon became a power couple in the world of body building. Neither were strangers to the spotlight and loved being the center of attention. Kelly was known as “Flyin’ Ryan” and held the title of Ms. Fitness America as well as Ms. Fitness Olympia. She won number competitions and took home first place at Fitness International. Her and I Titus seemed like the ideal couple as he also held fitness titles such as Iron Man and Mr. Olympia. The only difference between the two were their personalities. Kelly Ryan was very sweet and always happy. While Craig Titus was very headstrong and extremely arrogant. That would be a huge turnoff for me but too each their own, the arrogance not the headstrong thing. I myself have been told I am very headstrong, but people mostly voice it as a stubborn smartass.

Melissa James was a professional dancer with a beaming personality and killer smile. When she was nineteen, she made her child hood dream of opening up a dance studio and becoming a ballet instructor come to life. Dancing was not very popular in Florida at the time and soon Melissa James business went under and she found herself on the bad end of a business deal. Deciding that she needed to go elsewhere to make money, she packed her bags and moved to Las Vegas, Nevada. Not one to give up Melissa continued to network and put herself out there. Soon she found herself in the spotlight appearing in promotional campaigns and doing modeling work on the side. This road led her to a fitness competition where she met Craig Titus.  The couple appeared on the covers of fitness magazine, in fitness campaigns, and were very well known in Las Vegas. They absolutely dominated the world of weight lifting and body building.

Craig introduced Melissa James to his wife and after telling the couple her story about she ended up in Vegas and that she was trying to save up enough money to open up a new dance studio in Las Vegas Kelly offered for Melissa to live with them. Melissa couldn’t believe her luck, she got to live with this amazing couple and save up money at the same time by cutting out rent and utilities. It was a win win! In exchange for room and board Melissa became Kelly’s personal assistant. This also put her in the position of working closely with Titus as well and the two soon started having an affair. Ryan knew nothing about this and pretty sure it had nothing to do with the future events that took place. I just wanted to make sure I spilled ALL the tea.

Thing went well for a couple of weeks but before long the feelings between the trio turned sour. Titus and Ryan were sure Melissa was stealing money from them and was pocketing it for her own gain. Anytime something went missing around the house they were also certain Melissa had stolen it. I don’t believe they ever confronted Melissa but before long the bad vibes were just too much for James to bear. After just four months Melissa called her Mom and told her she wanted to come home, Las Vegas isn’t what she thought it was going to be. Craig Titus bought Melissa a ticket so she could fly home for the holidays before returning to collect her things and leaving Las Vegas for good. But Melissa never made it too her Mom’s house. She never even made it outside of Las Vegas.

On December 14, 2005 Melissa James was supposed to arrive in New Jersey to spend the holidays with her family. That day she called her mom, Maura, from a Las Vegas KFC to tell her she was having lunch before heading to McCarran International Airport and that she would see her that evening. That was the last time Maura would ever speak to her daughter. Later that day a truck driver heading towards Las Vegas noticed a car on fire on the side of the road.  He called police right away to report the incident.

Detectives arrived at Ryan’s residence and were shocked when they realized she was the person who answered the door after they rang the bell. So, the car was registered to Kelly Ryan so it obviously wasn’t her body they found in the trunk of her destroyed car. They decided the next best move was to enter the home. Once inside the five-bedroom Las Vegas house they asked Ryan to sit down and informed her that they found her car on the side of the road. Ryan quickly told the detectives that her car had been stolen around 5:00 that morning and believed that her roommate Melissa James had been the one who took it. Kelly Ryan seemed eager to tell authorities about the fight her and her husband, Craig Titus, had with James the night before.

Polk told detectives that on December fifteenth Ryan and Titus showed up at her house around 5:00(pm) and that both of them seemed overly anxious and paranoid. The told her that Kelly’s Jaguar had been stolen and was found burnt to a crisp with a dead body in the trunk. Later that evening Polk and Ryan drove to nearby restaurant to pick up some dinner. It was during this drive that Kelly Ryan shared with Lauren Polk that her and Craig Titus found Melissa James in her room deceased from an apparent overdose. After discovering the body Kelly told Lauren that she drove to Walmart to buy the lighter fluid so they could drive the car somewhere with the body inside and get rid of it. So, the story changed again, I thought the couple said they found Melissa’s body in the garage?

Detectives also had another trick of their sleeves; they had spoken with other friends the couple had confided in and found a taser in a duffle bag that appeared to have been used on James. Look, I’m not genius and it may have taken me ten years to finish community college but if somebody overdoses you wouldn’t need to use a taser to disable them, right? The taser showed that it was fired five times. Only two people know what really happened in the home on the night of December fourteenth. Kelly Ryan and Craig Titus. Detective theorized that Titus and Ryan attacked Melissa James with the Taser, drugged her with morphine, duct taped her face, restrained her, and beat her. Doing all of this before placing her in the trunk of the car and setting it on fire with her inside…still alive.

However, the couple claimed that Melissa had overdosed and with the amount of Morphine found in her system the detectives decided not to take a chance with a jury. Fear of not being able to prove that James was drugged and didn’t administer the drugs herself put plea deals on the table. As part of his plea deal Craig Titus plead guilty to second degree murder, first degree kidnapping and arson. On August 22, 2008 Craig Titus was sentenced to twenty-one to fifty years in prison. He will be eligible for parole on December 23, 2026. Craig Titus went on to tell a Judge that he killed Melissa James in a drug fueled rage but that it was an accident. Based on everything that occurred after her death the Judge didn’t buy it one bit.

As part of her plea deal Kelly Ryan plead guilty to arson as well as battery with a deadly weapon with significant bodily harm. On August 22, 2008 Ryan was sentenced to six to twenty-six years in prison. On October 24, 2017 Kelly Ryan was released on parole after spending ONLY nine years behind bars. Craig Titus and Kelly Ryan divorced in December 2009.

To this day nobody knows what really happened in the house that fateful night and we probably never will. The only possible motive is that Ryan found out about her husband’s affair with James and became insanely jealous. Instead of just letting Melissa James go back home to New Jersey, Kelly Ryan erased her from their lives…permanently. The next time you think someone has a picture-perfect marriage think again. Craig Titus and Kelly Ryan were all smiles in the public eye. The perfect power couple in front of the cameras. But behind closed doors there was infidelity, drug use, jealousy, and ultimately murder.